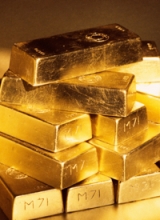 It remains unclear exactly why or how the Gadhafi regime went from “a model” and an “important ally” to the next target for regime change in a period of just a few years. But after claims of “genocide” as the justification for NATO intervention were disputed by experts, several other theories have been floated.

Oil, of course, has been mentioned frequently — Libya is Africa‘s largest oil producer. But one possible reason in particular for Gadhafi’s fall from grace has gained significant traction among analysts and segments of the non-Western media: central banking and the global monetary system.

According to more than a few observers, Gadhafi’s plan to quit selling Libyan oil in U.S. dollars — demanding payment instead in gold-backed “dinars” (a single African currency made from gold) — was the real cause. The regime, sitting on massive amounts of gold, estimated at close to 150 tons, was also pushing other African and Middle Eastern governments to follow suit.  And it literally had the potential to bring down the dollar…

via Gadhafi’s Gold-money Plan Would Have Devastated Dollar.