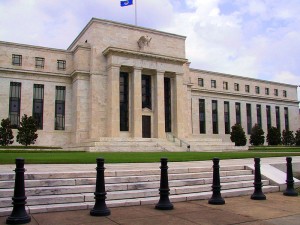 The Wall Street Journal recently reported that in 2011, the Federal Reserve purchased a mind-blowing 61% of Treasury debt issuance…  When the U.S. needs money to fund its ever-expanding foreign interests, social welfare programs, or its war against dried flowers, it can obtain that money through a few different means. The least effective and most politically dangerous way for it to obtain money is to threaten American citizens with imprisonment if they don’t fork over their dough. Historically, Americans have refused to hand over anything greater than 20% of GDP through taxes regardless of tax rates or the threats the state makes against their person.

Since the state has trouble getting Americans to hand over their money, it generally turns to the much easier second option to finance itself: printing money. In today’s economy, the state prints money by issuing treasury debt. Normally it sells this debt to foreign nations, since this exports the inflation created by the issuance of new debt. However, there are natural limits to the amount of debt foreign nations are willing to hold.

The U.S. has reached that limit and then some… via| Libertarian News.