It is easy to be upset about what is happening all around. The economy is being destroyed, deliberately, by insane economic policies. Incentives to work are being eliminated by punishing work. At the same time rewards are increasing for not working. Not surprisingly we get less of what we penalize (work) and more of what we subsidize (non-work). 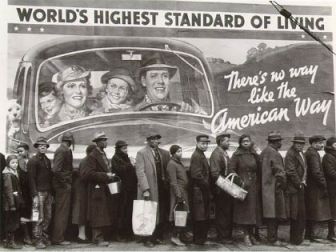 As an economist I get sick over what I see happening to what was once a great engine of productivity, capital creation and improvements in standards of living.

After two centuries of progress that amazed the world, the conditions necessary for growth and productivity are steadily being removed. Their presence allowed the miracle of America. Their absence guarantees the decline. Carried to extreme, the US could become a second or third-world nation within a few decades. Virtually all changes in the last five to ten years point in this direction and these changes are accelerating.

Economic decline is difficult to convey, although data are useful.

The decline of liberty, however, is not easily quantifiable and even more difficult to communicate. An email from Simon Black, expresses his concern regarding Leviathan government and its increasing oppression. It provides as good a qualitative measure of what is occurring to freedom in this country:

By now it should be clear to anyone paying attention that most of Western civilization is on a dangerous slide into tyranny.

They’ve authorized military detention and drone assassination of their own citizens.

Think about it. These are Soviet tactics, plain and simple.

What’s more, they don’t even care. They think we’re all idiots who are too stupid to even notice what they’re doing.

In fact, just a few days ago, Barack Obama staunchly defended his policies, saying “you can complain about Big Brother. . . but when you actually look at the details, then I think we’ve struck the right balance.” This is textbook sociopathic behavior: destructive, antisocial conduct and a complete lack of conscience.

Unfortunately this is just the beginning.

Unless government oppression is beaten back, there is no hope for the future. For those who focus on the foolish economic policies, they miss the root cause of all of our problems — oversized, overactive, interventionist, overcontrolling and oppressive government. Unless government can be reduced in size and power dramatically and then put back into its Constitutional box, nothing will improve in the economy. Ultimately the economy will collapse and freedom will be lost.

History shows no examples reversing these kinds of trends. Civilizations die as a result and then they rebuild from the ashes. But history never knew the flowering of such a vibrant civilization before our break from King George. It seems as though a similar miracle is required today.

I fear the majority of the American people are too dumbed down to understand what is happening to them and their country. They appear too content collecting whatever benefits the government buys them off with. These benefits will cease when the economy can no longer be pillaged. By then, it will likely be too late.

America will continue to exist and it will eventually be free and prosperous again. But there will be a long period, call it the modern-day  Dark Ages, before freedom and prosperity return. A century or so seems a reasonable guess. Evil will eventually be overcome, but not before generations suffer as a result of our allowing and enabling the growth in government power.

2 thoughts on “Why Things Will Get Worse – Much Worse | ZeroHedge”