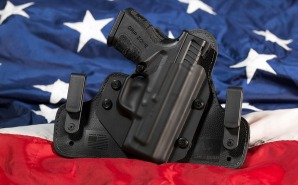 Last week, a federal judge overturned a ban on “assault weapons” and firearm registration requirements while upholding the constitutionality of openly carrying firearms in public.

The case that was ruled on by Manglona was brought up by Paul Murphy, “a veteran who served honorably on active duty in Iraq and Afghanistan as a U.S. Army Ranger, [and who filed suit] to validate his constitutional right to keep and bear arms for self-defense.”

“Murphy’s battle for justice began more than nine years ago when he first applied for and was denied possession and use of his firearms,” Manglona writes. “Plaintiff has valiantly pursued all lawful efforts to protect and defend his rights in a community where the voice of the majority can often overpower the equally important rights of the minority.”

One thought on “Fed. Judge Overturns Ban On Open Carry, Shuts Down Ban On “Assault Weapons””