A. The US Supreme Court has found roadblocks to be legal for a variety of purposes, the most prominent being so-called “sobriety check points.” There is a longer history of roadblock approvals related to checking vehicles near or at national border crossings…

via 5 Things You Need To Know About Roadblocks.

This just in from the progressive, communist libtards at the SPLC via their organ-grinders at USA Today…  I hope one day to be named on their enemies list.

Radical anti-government “patriot” groups and militias, galvanized against gun control, will continue to grow even as the number of groups operating in the USA reached an all-time high in 2012, a report Tuesday by the Southern Poverty Law Center finds.

The center tracked 1,360 radical militias and anti-government groups in 2012, an eightfold increase over 2008, when it recorded 149 such groups. The explosive growth began four years ago, sparked by the election of President Obama and anger about the poor economy, the center says. That growth is likely to continue as the groups recruit more members with a pro-gun message, the center’s senior fellow Mark Potok said.

END_OF_DOCUMENT_TOKEN_TO_BE_REPLACED

Indeed, critics, who have been sounding the alarm bells for years, say the plot — a version of which is already in place under the brutal communist regime ruling mainland China — represents a major danger to privacy, free speech, Internet freedom, and more. Organizations and activists from virtually every point on the political spectrum are gearing up to “vehemently” oppose the plan and its brazen threats to freedom — not to mention the constitutional and practical problems it entails. END_OF_DOCUMENT_TOKEN_TO_BE_REPLACED

We have often suggested that, if we wish to know what is coming politically, socially, and economically in jurisdictions such as the EU and US, we might have a look at countries like Argentina and Venezuela, as they are in a similar state of near-collapse (for the very same reasons as the EU and US) but are a bit further along in the historical pattern.

Such a bellwether was seen in Argentina recently. Although the event in question is a very minor one, it is an illustration of the social tipping point—the manner in which a government loses control over its people.

Briefly, the events were as follows: Two men on a motorbike cruised a posh neighbourhood in Buenos Aires, seeking opportunities for purse-snatching. The pillion rider dismounted and snatched a purse from a woman. Bystanders saw the act, ran down the thief before he could re-mount the motorbike, and knocked him to the ground. Other onlookers (very possibly fed up with street crime caused by economic hardships) joined in. In a fury, they beat the thief senseless.

A policewoman managed to calm the group and handcuff the thief. Twenty minutes later, police assistance and an ambulance arrived.

Furious neighbours complained bitterly that the police had protected the thief but are generally doing little to protect law-abiding citizens. END_OF_DOCUMENT_TOKEN_TO_BE_REPLACED

……..        The IRA LLC   I must lead with a caveat here that I am biased to this concept. I am a ‘for profit’ consultant and facilitator of the IRA LLC. This platform has its pros and cons as any other. The upfront cost can range from $1,500 to $3,000 to have an attorney or professional facilitator set one of these up, and the proper setup is crucial. Involved are numerous legal documents, affidavits, and compliance requirements that must be met. Once setup the flexibility is great and the ongoing fee structure is very low, typically $115 to $200 per year. Within the structure the LLC acts as an investment company that is managed by the individual, whom is also the beneficiary of the IRA. As long as there are no prohibited transactions the investor can invest in literally anything except collectibles and life insurance contracts. Many include: investment real estate, bug out property, private placements, oil & gas leases, loans, currencies, Bitcoin, other LLCs, etc. The LLC also adds another layer of protection from potential Govt pillaging of retirement accounts as referenced above.

Perhaps the biggest advantage of the IRA LLC to the Precious Metals investor is that the individual (manager of the LLC) can take physical possession of Gold and Silver Eagle Coins with IRA funds and it is not a taxable distribution. The metal does not have to be held at a depository. For folks that have considered cashing out their IRAs or 401ks thus paying taxes and penalties, this can be a much cheaper alternative to physically holding precious metals. There are no additional IRS reporting requirements, merely an annual dollar asset valuation reported to the custodian…

Since that provision of the law took effect March 16, officials have received at least 30 reports of people whose gun licenses should be reviewed, state police say. END_OF_DOCUMENT_TOKEN_TO_BE_REPLACED

Up-Chuck Schumer turns out a SOLID 100 people to rally for more pointless gun laws.  These rubes, dupes and socialists are reportedly from from his 16th district, which voted 95% Democrat for Obama on a turnout of 131,000 in 2008.

Perhaps it’s me, but the ‘male’ supporters behind the barricades look like metro-sexual, quasi-men of the urbane, useless and incompetent stripe.  Just saying….

Days after the stinging defeat of gun control measures in the Senate, Sen. Chuck Schumer (D-N.Y.) and gun-safety advocates rallied to show continued support for cracking down on guns.

About 100 people gathered outside Schumer’s Manhattan office to vow to push on despite the defeat of a measure to expand background checks for gun purchases…via NY Daily News.

I must admit feeling left out from this, had I only known…  Instead I was hunting with my son.  Not seeing any fair game, we just shot up an old vehicle in the woods instead.  I don’t think Schumer or his bath-house buddies would approve.

Were I only to give a damn.

A supposed “gotcha” often heard from anti-gun extremists is the notion that the right to keep and bear arms was contingent on membership in a militia and, there no longer being militias, the right was transferred to their successor, the armed forces. It’s nonsense of course, privileges are contingent, rights are not, and the Supreme Court agrees, if only in the same sense they agree with gravity, less than readily and with a dollop of adolescent petulance from the dissenters.

Supreme Court, 2008- We look to this because it has always been widely understood that the Second Amendment, like the First and Fourth Amendments, codified a pre-existing right. The very text of the Second Amendment implicitly recognizes the pre-existence of the right and declares only that it “shall not be infringed.” As we said in United States v. Cruikshank , 92 U. S. 542, 553 (1876), “[t]his is not a right granted by the Constitution. Neither is it in any manner dependent upon that instrument for its existence. The Second amendment declares that it shall not be infringed…
US Supreme Court, Heller Decision at scotusblog.com END_OF_DOCUMENT_TOKEN_TO_BE_REPLACED 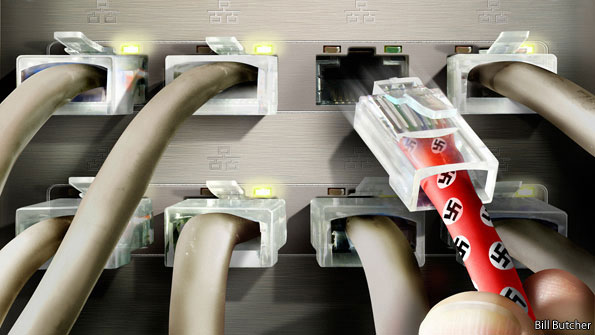 THE arrest of a senior executive rarely brings helpful headlines. But when Brazilian authorities briefly detained Google’s country boss on September 26th—for refusing to remove videos from its YouTube subsidiary that appeared to breach electoral laws—they helped the firm repair its image as a defender of free speech.

Two weeks earlier those credentials looked tarnished. Google blocked net users in eight countries from viewing a film trailer that had incensed Muslims. In six states, including India and Saudi Arabia, local courts banned the footage. In Egypt and Libya, where protesters attacked American embassies and killed several people, Google took the video down of its own accord.

Hillary Clinton, US Secretary of State has announced that the Obama administration is working with the United Nations (UN) to approve, through the US Congress, the Small Arms Treaty (SAT). END_OF_DOCUMENT_TOKEN_TO_BE_REPLACED

… One Freedom to Travel member, who also happens to be a tenured mathematics professor, applied something called Bayes Rule and the concept of Base Rate Fallacy to the TSA’s behavior-detection methods… It revealed that even if TSA’s current screening practices were 100 percent effective, only one in 5 million flagged “high risk” passengers would be a terrorist.

Wall Street banks have secretly taken over US firearms and ammunition manufacturers and the world’s largest mercenary firms in a stealth build up private military force.

The one thing about cash is that it is anonymous. And that’s the one thing that intrusive governments don’t like about it.

via Cash for Freedom by Charles Goyette via Lew Rockwell.

A recently published “lexicon” distributed to thousands of federal, state, and local law enforcement agencies by the Department of Homeland Security (DHS) targets citizens concerned about their Second Amendment rights and the steady encroachment of the federal government, categorizing such as “militia extremists.”

The “lexicon,” marked Unclassified/For Official Use Only (FOUO), is dated November 10, 2011, and was sent out by email to law enforcement and homeland security agencies on November 14 by LaJuan E. Washington of the DHS Office of Intelligence and Analysis.

We have exclusively posted the DHS “lexicon” here... via PJ Media