Here’s a real friggin’ genius that was once of the NJ’s finest.  What a dope.

John Marion, a former police officer in Waldwick Borough, N.J., was sentenced today for stealing more than $321,000 by fraudulently collecting a disability pension from the State of New Jersey while working full-time as an officer in Georgia.

John Robert Marion, 44, of Valdosta, Georgia, was sentenced to 364 days in the county jail as a condition of four years of probation by Superior Court Judge Peter E. Warshaw in Mercer County. He was immediately taken into custody to begin serving his jail term. Marion pleaded guilty on Nov. 12 to a charge of third-degree theft by deception. He must pay full restitution of $321,008 and is permanently barred from public employment in New Jersey. He turned over a check for $100,000 in court today toward that restitution… The investigation began with a referral from the Pension Fraud & Abuse Unit in the New Jersey Division of Pensions.

END_OF_DOCUMENT_TOKEN_TO_BE_REPLACED 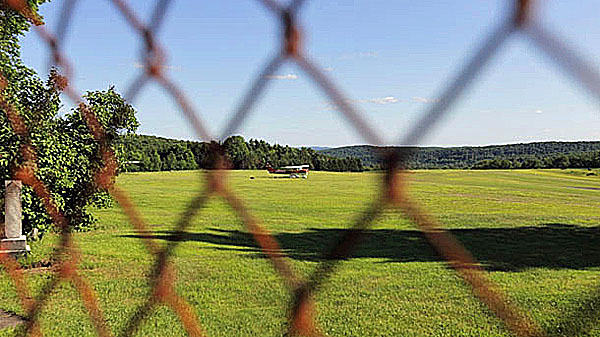 The Delaware County, New York, sheriff’s office does not believe there is any credible threat emanating from an Islamic commune within their jurisdiction that serves as the national headquarters for a Muslim organization previously accused of engaging in paramilitary training within the U.S.

Craig Dumont, deputy sheriff of Delaware County, appeared Sunday on “Aaron Klein Investigative Radio” on New York’s AM 970 The Answer, where he downplayed concern about Islamberg, a 70-acre rural hamlet that is the headquarters for Muslims of the America, Inc., or MOA.  MOA was founded by controversial Pakistani Sufi cleric Mubarak Ali Gilani.

Dumont told Klein his office has been inside Islamberg on a number of occasions and that he has been “perplexed” by recent news media reports of alleged jihadist training camps.

“It’s kind of perplexing to us,” he said. “All this recent media attention in regard to potential terrorist training camps and things that are going on there. We don’t see it. We just don’t find any of that to be valid at this time. … There are no active threats that we are aware of at this time.” END_OF_DOCUMENT_TOKEN_TO_BE_REPLACED

ATLANTA — A Georgia judge has heard arguments and is considering a complaint that seeks to keep President Barack Obama off the state’s ballot.Obama’s local attorney Michael Jablonski boycotted Thursday’s hearing in Atlanta. Plaintiff’s attorneys urged Deputy Chief Judge Michael Malihi to hold him and the president in contempt. The judge didn’t set a timeline for a ruling.About 100 people listened to hours of arguments from the attorneys, who included state Rep. Mark Hatfield, a Waycross Republican.

The complaint contends Obama isn’t a natural-born U.S. citizen and therefore should not be on the state’s ballot. Similar complaints have been filed in other states with no success.Obama’s attorney argues that the president has long made his birth certificate and other documents proving his citizenship available to the public.The Georgia complaint wants to keep Obama’s name off the state’s presidential primary ballot in March…

For those who have waited 3 years for a judge to finally rule that Barack Hussein Obama must prove that he is legally and Constitutionally qualified to run for or serve as President of the United States, the day may have come at last.

For on Friday, Georgia State Office of Administrative Hearings Judge Michael Malihi ruled that subpoenas demanding the presence of Barack Obama in his Georgia courtroom on January 26th along with the original form of his Hawaii birth certificate and information on his myriad Social Security numbers will remain in force.

Obama ‘s attorney Michael Jablonski had filed a motion to quash those subpoenas, arguing if Obama were made to answer questions before the court it would “…[require] him to interrupt duties as President of the United States…” (1)

It was also Obama’s claim that “presidential electors and Congress, not the State of Georgia, hold the Constitutional responsibility for determining the qualifications of presidential candidates.” (1)

Well Judge Malihi did not agree with Obama’s arguments that the laws of the State of Georgia were somehow irrelevant to the process, or that his presence in the court would materially interfere with his ability to discharge the duties of his office.

In his decision to allow the subpoenas to remain in force, Malihi wrote, “…Defendant (Obama) has failed to cite any legal authority evidencing why his attendance is ‘unreasonable or oppressive, or that testimony…is irrelevant, immaterial, or cumulative and unnecessary to a party’s preparation or presentation at the hearing, or that basic fairness dictates that the subpoena should not be enforced.’ ” (2)

In short, as Judge Malihi so eloquently put it, “”Defendants motion to quash is denied.” (2)

The process before Judge Mahili began when a number of Georgia residents filed 3 separate lawsuits demanding that Barack Obama provide evidence of having met State of Georgia election law requirements before being placed on the ballot. Malihi agreed with the plaintiffs, quoting in his ruling Georgia law which states “…every candidate for federal office shall meet the constitutional and statutory qualifications for holding the office being sought.” (3)

In that ruling, Mahili stated “the court finds that the defendant (Barack Obama) is a candidate for federal office who has been certified by the state executive committee of a political party and therefore must, under Code Section 21-2-5, meet the constitutional and statutory qualifications for holding the office being sought.” (3)

Though Obama has managed to ooze his way out of legal responsibilities and requirements in the past, this time it really might be a bit thick for the acting president. Even the radically leftist Southern Poverty Law Center has decided to weigh in, giving vent to a typically childish attack of spleen in its “Hatewatch” column no less, where it snivels “…Malihi’s decision has been heralded far and wide as a defining moment for those who have hounded Obama about his lineage.” (4)

Apparently demands that Barack Hussein Obama actually abide by the laws of the land and the Constitution of the United States make for a clear case of “hounding” to an organization known to file suit at the drop of a conservative hat.

Here’s hoping Judge Malihi’s courtroom turns liberal petulance to leftist rage on January 26th. For Malihi’s ruling that day will determine whether or not Barack Hussein Obama may be certified by the Democrat Party to appear on the Georgia ballot in November. And as the Liberty Legal Foundation explains it, “without such a certification from the Party, Obama will not appear on any ballot in the 2012 general election.” (5) ….  go here  Coach is Right  for the rest

An alleged plot to attack U.S. federal law officers by suspected members of a fringe north Georgia militia group was inspired by an online anti-government novel, authorities said.The four listed in the indictment are Thomas; Dan Roberts, 67; Ray Adams, 65; and Samuel Crump, 68. The men live in the north Georgia towns of Cleveland and Toccoa.

Court documents state that 73-year-old Frederick Thomas, a suspected member of the group, told others that he intended to model their actions on the online novel “Absolved,” which involves small groups of citizens attacking U.S. officials.

According to a federal complaint. the four suspected members [my emphasis added to highlight what these nitwits actually MAY have done] …

And now the punchline:  ” U.S. Attorney Sally Quillian Yates said the case is a reminder that “we must also remain vigilant in protecting our country from citizens within our own borders who threaten our safety and security.”

Thus, these four elderly rubes – all stupid enough not to avoid being framed and to be able to maintain basic operational security in their ‘terrorist operation’ – are now trotted out as one more reason to strip civil liberties from United States citizens.  I guess that the FBI was having trouble finding enough home grown Muslim terrorists to justify the police state.
— (The full farcical story is here:)
— The link to the seditionist and thus high dangerous online novel “Absolved”.  Ooooo, scary.