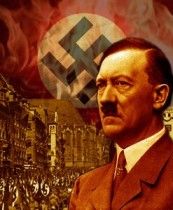 …Our nation has entered into the last stages of fascism. Both parties have supported this path since Hoover and FDR of the 1930s, both parties are guilty. The only way to avoid a repeat of Germany 1933-45 is to go all out to defeat fascism here in America by any means necessary.

That means renouncing the programs that transfer power to the federal government such as social security, Medicare, education, transportation, and banking regulations, everything that allows centralized planning needs to be opposed. This means conservatives have to stop giving capitalism lip service and embrace the free enterprise system.

We need to understand government produces nothing; they can only create poverty, death, and destruction…. END_OF_DOCUMENT_TOKEN_TO_BE_REPLACED

… Instead of liquidating the debt and allowing the economy to reach a sound footing, both the Hoover and Roosevelt administrations attempted to manage it back to health. The result was the longest period of unemployment ever recorded in American history…

The media establishment, not to be outdone, is also on the side of intervention. Government is looked to as a savior while markets are seen as inadequate in providing for a satisfactory standard of living. With their incessant need to fix what isn’t broke, the political class is praised for their courage to take the reins of society and direct it toward a meaningful and just way of life… via What Happened to Virtue?.

With Senate Majority Leader Reid’s (D-NV) decision on Tuesday to not pass a budget for the third straight fiscal year, the Washington game of fiscal chicken–this time over $19 billion–is in full swing once again. To provide perspective, this is less than one-half of one-percent of the 2012 budget and less than 1.5% of this year’s expected deficit. It’s also about one-eighth of one percent of our national debt.

While politicians bicker, Rome burns and the budget grows. While some pundits blame Obama, and others blame Bush, and still others blame everyone in the Beltway, the fact is neither president or party has instituted the wisest fiscal policy. Still, the increase in spending under both has not been driven principally by new spending initiatives. It has instead been driven by the increasing number of retirees and resulting growth of social spending and especially Social Security and Medicare. END_OF_DOCUMENT_TOKEN_TO_BE_REPLACED

Everyone talks about reforming health insurance while ignoring a better alternative: healthcare risk pools. Powerful lobbyists for the healthcare insurance industry have convinced politicians to perpetuate the current system of health insurance, hoping that minor tweaks will solve the escalating crisis. Conservative think tanks have even bought into the system due to heavy funding by insurance companies.

Risk pools allow people to buy into health plans of their choosing instead of obtaining health insurance coverage through employers. Health insurance is not a free market creation. It came into existence as the result of President Franklin D. Roosevelt’s socialist policies. Roosevelt mandated income caps during World War II, which caused employers to offer health insurance in order to keep jobs attractive. Now the government requires businesses to provide health coverage to employees, giving insurance companies a monopoly on healthcare coverage and ensuring their existence. END_OF_DOCUMENT_TOKEN_TO_BE_REPLACED

Each generation hopes their children and grandchildren will achieve more economic potential and more individual freedom than prior generations. As a new grandfather I researched economic conditions and education quality facing the generation of my infant grandchildren and their parents, compared to that faced by my generation when their age. The results are available to you in a series of free mini-reports listed on the home page – with explanatory pictures.

There are so many great & positive things about our beloved America to celebrate. But, there are also some negative trends. Perhaps if more are aware of the negatives even more solutions & positives will result. The objective of these reports is to increase awareness of certain disturbing items, using an easy-to-understand format with hard data presented in picture form.

Wilson criticized the diffuseness of government power in the US in most famous book Congressional Government. In this work he confessed, “I cannot imagine power as a thing negative and not positive.” His love and worship of power was a prime characteristic of fascism. “If any trait bubbles up in all one reads about Wilson it is this: he loved, craved, and in a sense glorified power,” writes historian Walter McDougall. It should not surprise us that his idols were Abraham Lincoln and Otto von Bismarck.

“No doubt a lot of nonsense has been talked about the inalienable rights of the individual, and a great deal that was mere sentiment and pleasing speculation has been put forward as fundamental principle,” wrote Wilson, attacking the very individual rights that have made America great.

“US politics are almost entirely a referendum on expanding, modifying, limiting or otherwise endorsing programs put in place by Congress between 1933 and 1936, during President Roosevelt’s first term, a body of collectivist twaddle called the New Deal. Among them are the FDIC, the FHA, the SEC, Social Security—which is in large part a welfare program with emphasis on the handicapped, the Surplus Commodities Program—now known as the Food Stamp Program, farm subsidies, the perpetually reinvoked Wealth Tax Act of 1935, and the National Labor Relations Act, since renamed, for a few, none of which are Constitutional, all of which are a tumor on the populace and a marrow-tap on the desiccated husk of our former republic.

Rather than recoil in horror from their crimes, rather than turn their face to the people in tearful supplication, rather than even minimal remorse and a mumbled apology, further insults have been inflicted to widen and deepen the New Deal, such as the Departments of Health and Human Services, Housing and Urban Development, Transportation, Education, the Environment Protection Agency—one of Nixon’s bright ideas, the Departments of Energy and Homeland Security and other fascist claptrap with their thousands of agencies and sub-agencies whose real mandate is a feces fight with an unarmed populace.

Ask most so-called conservatives if they’re willing to go back to pre-New Deal America. The answer, shorn of its Clintonesque waffling, will be no. Therefore they are New Deal collectivists. No patriotic citizen of conscience will lend legitimacy to this farce by participating in their, formerly our, national elections. Punching the New Deal’s ticket every couple of years has no upside. Stay home on election day, spend it immersed in some guilty pleasure or another, vote for “None of the Above” and luxuriate in unblemished righteousness thereafter…“