Dollars vs Money « The Grey Enigma. 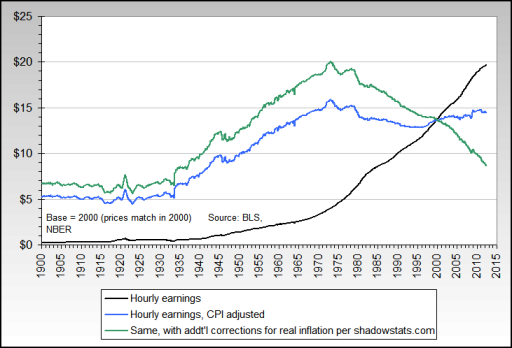 …We see two things in the chart above on average American wages. First we see how (in real dollars) wages for the average U.S. worker have been falling steadily for more than 40 years. Those wages have now fallen by more than 50%, all the way down to the same levels as during the Great Depression. And we see how the U.S. government’s lies about inflation have almost entirely concealed this relentless collapse in wages. How convenient.

Meanwhile, we see the percentage of Americans who are actually working also plummeting downward, to a 30-year low. The collapse in wages has been accompanied by a collapse in employment levels. Combined, it translates into a collapse in consumer purchasing power of well in excess of 50%.

The great Economic Myth (naturally perpetuated by the U.S. government) is that “the world can’t live without” the American Consumer. The truth is that the rest of the world has been gradually learning how to live without the American consumer for the past 40 years, as the American consumer is literally less than half what he used to be. The real-and-obvious question instead is how will the U.S.’s consumer economy be able to survive the Death of the U.S. Consumer?… via Economy: The U.S. Retail Collapse Accelerates ETF DAILY NEWS.

Alternate Inflation Charts.  The CPI chart … reflects our estimate of inflation for today as if it were calculated the same way it was in 1990. The CPI on the Alternate Data Series tab here reflects the CPI as if it were calculated using the methodologies in place in 1980. In general terms, methodological shifts in government reporting have depressed reported inflation, moving the concept of the CPI away from being a measure of the cost of living needed to maintain a constant standard of living…

How Long Will This Economic Depression Last? Five Key Data Points That Can’t Be Ignored :: The Market Oracle