This predatory exploitation is only possible if the central bank and state have partnered with financial Elites.

After decades of denial, the mainstream has finally conceded that rising income and wealth inequality is a problem–not just economically, but politically, for as we all know wealth buys political influence/favors, and as we’ll see below, the federal government enables and enforces most of the skims and scams that have made the rich richer and everyone else poorer. 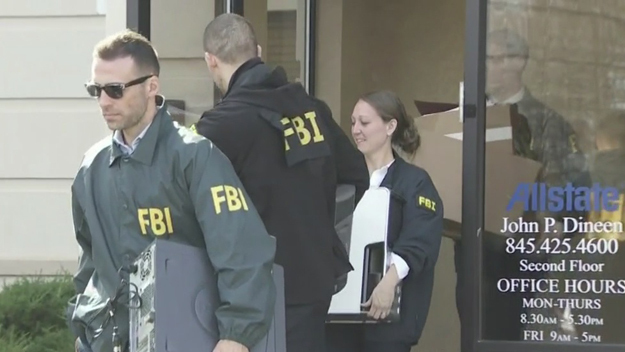 RAMAPO,NY – Federal authorities raided private Jewish schools and businesses in Rockland County to see if millions of federal dollars earmarked for education technology were misused.FBI agents conducted 22 separate search warrants at yeshivas and offices in the town of Ramapo on Wednesday afternoon, the Journal News reported. Agents were seen going in and out of a private business in Monsey, removing computer hard drives and documents.The investigators asked them to provide records of equipment allegedly bought through the federal government’s E-Rate program, which pays for technology in schools, the newspaper reported…more: Yeshivas Investigated

… Congratulations Cyprus savers – you were just betrayed by both your politicians, and by Europe – sorry, but you are the “creeping impairments” in the game known as European bankruptcy.  And so is anywhere between 6.75% and 9.9% of your money, which you were foolish enough to keep with your banks (where at least you were compensated with a savings yield of… 0%).

More importantly, as of this morning Europe has finally grasped that there is a 6.75% to 9.9% premium to holding physical cash in your mattress rather than having it stored with your local friendly insolvent bank.

Luckily Cyprus is so “small” what just happened there will never happen anywhere else: after all in Europe nobody has ever heard of “setting an example”.  Or so the thinking among Europe’s unthinking political elite goes.

And congratulations Europe: just when people almost believed you things are “fixed” you go ahead and prove to the world that you are as dis-unified (because size doesn’t matter in a true union), as confused, as stupid and as broke as ever…via …Saver “Panic”, Frozen Assets, Bank Runs, Broken ATMs | Zero Hedge.

Responding to this ZerHedge article,  Ann Barnhardt posted this:

Yes, it is every bit as bad as it sounds, and worse. Word is that the initial plan was for a 40% (!!!!) levy confiscation of Cypriot bank accounts. They settled for a MERE 6.75% and 9.9% dual-layered compromise.

Yeah, you all need to do what I have been doing for the last several months and live within spitting distance of being overdrawn in your bank accounts. In other words, keep the BARE MINIMUM in the bank and feed your account just enough to cover the bills. As soon as money comes in, get it the heck out of there.

Looks like the IRS may prove to be the least of my worries with regards to levying bank accounts!

This has the potential to spark bank runs in other Southern European nations MERELY BECAUSE OF THE FACT THAT IT ACTUALLY HAS HAPPENED. Pray the Greeks, Italians, Spaniards and Portuguese are all watching talent shows or soccer and don’t notice. But if it does, if you have watched my eight-part economic presentation on YouTube, then you understand that we will blow sky-high as the big banks and their tens of trillions of dollars in repos and reverse repos and credit default swaps, many-to-most of which are written on European sovereign debt, blow.

…   UPDATE: I agree with various commentators that this is almost certainly a test-run by Brussels to see what the reaction of the Cypriots is. If no one is hanging from light poles by sunset on Tuesday, they will likely move on to Greece and the other Southern European economies, satisfied that the people have been sufficiently conditioned to roll over. Tiny Cyprus, an ISLAND mind you, makes the perfect test lab.

I anticipate that the light poles will remain undecorated. There is no fight left in the men of former Western Civilization; only indifference punctuated by self-loathing. Say goodnight, Gracie.

COLORADO SPRINGS, Colo. (CBS4) – Some evacuees from the Waldo Canyon Fire are returning home to find they were burglarized.  One couple’s car was stolen right out of their garage. Thieves also took jewelry and computers…  via CBS Denver.

Another day, another sticky-fingered Transportation Security Administration agent caught stealing from airline passengers: According to the Associated Press, 31-year-old Alexandra Schmid, a TSA screener at New York’s John F. Kennedy International Airport, allegedly helped herself to a cool $5,000 from a passenger’s jacket as it passed along an X-ray conveyor belt on February 1.

The passenger, a native of Bangladesh, noticed the money was missing as soon as he retrieved his jacket, at which point he reported the theft… via New American

..Americans have been very tolerant. We’ve handed money over for Wall Street bonuses rewarding the psychopaths who blew up our economy and created 23.9% unemployment the real undistorted employment rate. We’ve watched silently as Bernanke lied to us about the banks being fixed—as if we’re too stupid to know that FASB is now just legalized Enron accounting. We’ve rolled our eyes and bitten our tongues when some of the psychopaths later professed to be, “Doing God’s work.” We’ve watched our kids get molested by perverts hired off adds on pizza boxes, had our wives breasts exposed during these idiotic searches and ourselves been exposed to radiation while in naked body scanners that could be used in the oncology departments of hospitals.

I seriously suspect that people have had enough and that it won’t be long before they break out the pitchforks and torches. Throughout history we’ve read about times when citizens were forced to resort to violence in order to restore law and order.Ironic—if you really think about it.