Cameras: the great equalizer.  Behold Deputy Sgt. Shawn R. Glans (No, I am not making that up… how appropriate) getting his panties in a wad after being told to uphold the law and obtain a search warrant.  You see, these two nitwits (Adam Roberts and Colin Fitch) reportedly had left a .22 rifle on the back seat of their car in the Peoples Socialist Republic of NewYorkistan.  Not a good move boys…

But, Deputy Sgt. Pencil-Dick shows up – for whatever reason – and wants to get into the parked, locked car.  Stasi theatre of the Absurd ensues:

Now, the stress of the day-to-day that may have caused the fine deputy’s lapse in judgement may have been compounded by the paltry compensation he endured – $87,156 in 2014 – exacerbated by the fact that he only got a $7,000 raise (or overtime?) in the past year. I.e:

Shawn R and his wife Carrie M. (nee Bohanon) Glans reportedly purchased the home at 3 Tanglewood Drive, South Glens Falls NY on or about March 19, 2014 for $204,000 from Dolores Chittendon  Here is what that house reportedly looked like in 2013 – before the purchase.

A New York deputy with the Saratoga County Sheriff’s Department was caught on film early Friday morning slapping a young man who declined to have his vehicle searched.  According to Adam Roberts, who spoke with Infowars after uploading the disturbing video to YouTube, he and his friend Colin Fitch were approached by two deputies while shopping inside a WalMart that evening.

After being forced to present their IDs, the pair were taken outside to Colin’s vehicle and asked about a .22 rifle on the backseat.

As Colin explained that he had just purchased the rifle earlier that day at a nearby store, a deputy Shawn Glans began demanding access to the vehicle, despite Colin proving that he was of legal age to own it.

“So they started questioning us and were very ornery and asking about the gun and what not and then Colin asked him what we had done wrong and what he was charging us with and he didn’t give us a good answer,” Roberts said.

Choosing to assert his Fourth Amendment, Colin told Deputy Glans that he would not consent to a search unless a warrant was obtained.

“But he said he wanted to search the car… and my friend Colin asked him what his reason was for and the cop went on about how he just wanted to check, and Colin didn’t really feel like he had a real reason.”

After failing to coerce Colin into opening the vehicle, Deputy Glans became irate, ironically at the constitutional right he swore to uphold.

“Let me see your f*cking keys… I’m searching your f*cking car,” Deputy Glans said, taking Colin’s keys against his will.

“You saw the video. It doesn’t look good,” Glans told the Times Union. “I’m all about doing the right thing. I had to go to that point because of the factors that came into play. There was a gun that was involved (that) I spotted in the vehicle.”

Now it seems that Storm Trooper Penis-Glans is not quite a stranger to unprofessional behavior.  In March,1996 he cost the citizens of NewYorkistan millions in an attempt to relive the adrenaline rush of The Dukes of Hazard shows he watched in the 70’s, turning taxpayer Douglas H. McEachron into a non-taxpaying quadriplegic, by hurtling thru a 20mph zone at about 60 mph before the impact. I.e.: 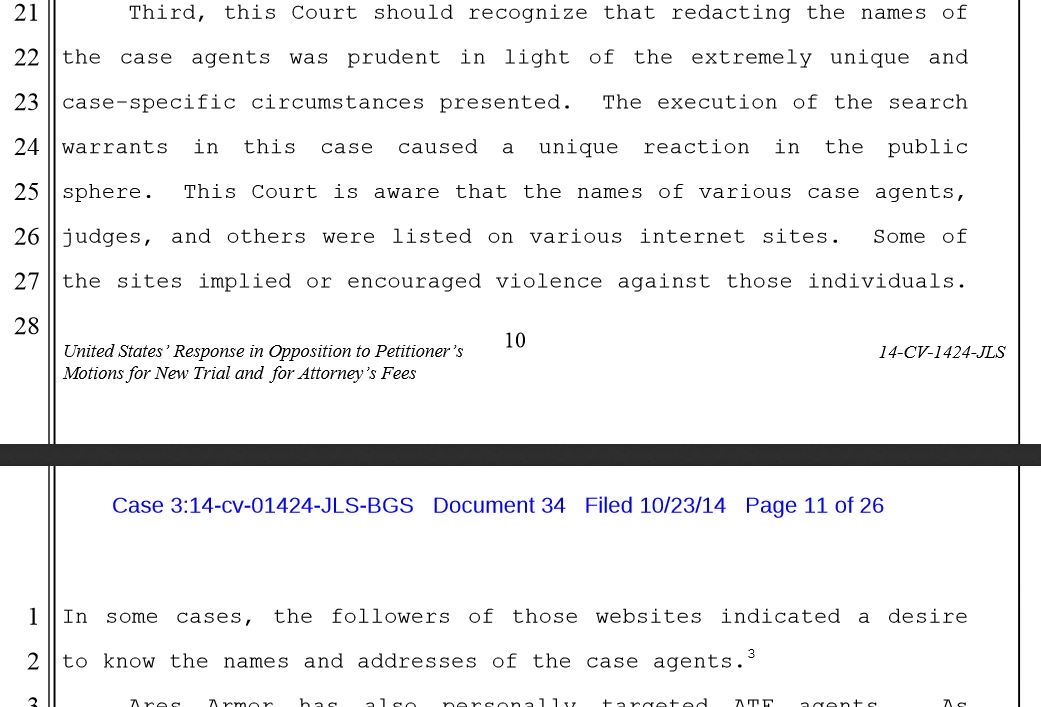 In one of the most amazing things I have ever seen, the BATFE, one of the most lawless agencies we have has targeted this small community here on the Charles Carroll Society (CCS). The Bureau of Alcohol, Tobacco, Firearms and Explosives (BATFE), specifically the United States Attorney listed the Charles Carrol Society as the example for their reason not to provide the names of the federal agents who lied to support the novel decision (that means B.S. for the rest of us) to say that an 80% lower is a firearm.  Why didn’t they target the Drudge Report? Why not Alex Jones Info War?  Those blogs covered the unconstitutional seizure of customer records from Ares Armor.   Because those blogs have lawyers and they have very loud voices.  Why not Cam at NRA News?  They wouldn’t dare.  They attack the smallest blogs.  Please forward this to the largest voices in the patriot blog-o-sphere and ask them to cover it.  END_OF_DOCUMENT_TOKEN_TO_BE_REPLACED

Cops conducted an illegal search of a house. So far, nothing new here. Cops found nothing. Still, nothing new. Cops decide to plant meth in the house. Interesting, but nearly impossible to prove. Cops get caught on their own dashcam talking about it. Bingo!

A police car dash cam captured Santa Clara deputies plotting to plant drugs in a woman’s home after their first illegal search turned up nothing, the woman claims in court.

Allison Ross, who was arrested after the second search of her home, sued the Santa Clara County Sheriff’s Department, its crime lab, Sheriff Laurie Smith, and 12 of her officers, in Federal Court.

Someone always asks, can the cops be so stupid that they would forget there is video and audio running, and talk about it openly?  Well, apparently so, though the question isn’t necessarily about the degree of stupid as opposed to the degree of brazen.  Force of habit dies hard. END_OF_DOCUMENT_TOKEN_TO_BE_REPLACED

In November 2009, police officers in the state of Washington seized an iPhone belonging to suspected drug dealer Daniel Lee. While the phone was in police custody, a man named Shawn Hinton sent a text message to the device, reading, “Hey whats up dogg can you call me i need to talk to you.” Suspecting that Hinton was looking to buy drugs from Lee, Detective Kevin Sawyer replied to the message, posing as Lee. With a series of text messages, he arranged to meet Hinton in the parking lot of a local grocery store—where Hinton was arrested and charged with attempted possession of heroin. END_OF_DOCUMENT_TOKEN_TO_BE_REPLACED

The police state is not only here – it is being welcomed with open arms.  Exhibit A: In Aurora, Colorado, police searching for suspected bank robbers locked down an entire intersection, dragooned 40 random motorists out of their cars at gunpoint, handcuffed them and “asked” for permission to search their vehicles…. via A Robbery of a Different Kind | Eric Peters Autos.

… The Basis for the Search Warrants states:

Mr. Dutton, a military veteran, has been preparing for the economic collapse of the world. In addition to gathering a large supply of non-perishable items, he also has a modest collection of firearms and ammunition. And he makes fireworks.

During the trial, the prosecution played clips from the popular National Geographic Channel show, “Doomsday Preppers”. The prosecution used images of various “crazy ass preppers” from the T.V. show to successfully paint a picture of Mr. Dutton, as someone on the fringe of society that posed an extreme danger to his community… via off grid survival

…. the American Civil Liberties Union shows that phone location tracking has also become a surprisingly common tool of law-enforcement investigations — with, but often without, a warrant.The ACLU recently obtained records from over 200 police departments and other law enforcement agencies around the U.S. They found that “virtually all” of these agencies track the location of cell phones with data supplied by wireless carriers… via ACLU: Most police track phones’ locations without warrants – CNN.com.

U.S. police can search a cell phone for its number without having a warrant, according to a federal appeals court ruling….The U.S. Court of Appeal for the 7th Circuit rejected that argument on Wednesday, finding that the invasion of privacy was so slight that the police’s actions did not violate the Fourth Amendment’s ban on unreasonable searches. END_OF_DOCUMENT_TOKEN_TO_BE_REPLACED